I am a freelance journalist and fiction/memoir writer. My stories chronicle my life as a baby boomer living in the suburbs of Northern California. Writing has been a passion since childhood. After I retired from a career in local government, I began pursuing it in earnest. My work has been featured on the Erma Bombeck Writers’ Workshop website. My fiction and non-fiction pieces appear in a number of collected works including, Not Your Mother’s Book…On Home Improvement, NYMB…on Working for a Living, Clash of the Couples, and Written Across the Genres, all available on Amazon.com. I contributed feature stories for the Danville Times, a local news magazine distributed by the Contra Costa Times, and for SanRamonPatch.com, a news and information website. I live in the San Francisco Bay Area. 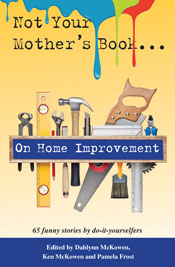 “‘You know the doorbell’s not working, right?’

My 18-year-old daughter dropped that little gem on me the day before the open house… Crap, I said to myself. I had never tackled an electrical issue before. Any fool could dump Liquid-Plumr down a drain or plunge the toilet, but a doorbell? This was a whole new experience.”

Read about my electrifying encounter with a feisty doorbell in Publishing Syndicate’s, Not Your Mother’s Book…On Home Improvement.

I thought I’d won the golden ticket to Willy Wonka’s Chocolate Factory. Thirty-something and single, just hired by the sheriff’s office, I envisioned uniformed men stumbling over themselves, catering to my every whim. Little did I know the experience would turn out to be more like a minefield than a candy store.

My work was first recognized in the mid-‘60s when a short story I submitted to the kids column of the Oakland Tribune won first place. I did little writing after that, save for a series of love poems written in my teens, and a disturbing piece I came across awhile back. Printed in a middle school anthology and entitled, First World, it begins:

All alone in the silence of my room,

I sit and my heart begins to boom.

On my cheek, a tear,

That makes me think that death is near.

It wasn’t until years later that my desire to write rekindled, not coincidentally at the same time I was introduced to a new technology.

Word processing was invented for me. I attended my first class in the Wang System while employed as a clerical unit supervisor for Alameda County in the early ‘80s. This was in the years before mice, color monitors, and WYSIWYG. The only thing staring back from the monitor back then was a black screen and a blinking green cursor. Despite its shortcomings and limitations, I fell in love with it.

So enamored was I with this new tool that I purchased one at a time when home computers were little more than novelties. I drafted my first novel on that dinosaur.

As personal computers replaced the word processors of the day, the Wang system was supplanted by the more powerful Word Perfect. And after that, Microsoft Word. The more functions I learned, the more I wanted to learn. I became fascinated with all the possible applications for this technology. I even conducted classes for a period in my career.

Word processing became my playground. I stretched the boundaries of its capabilities and bent them to my will. Unable to satisfy my addiction to this technological advancement, I invented uses for home projects. I started generating our annual family holiday newsletter, made up of images of family vacations and achievements, complete with clip art and captions, more for the joy of creating the document than to share our lives with distant relatives and friends. I even published the newsletters for two nonprofit organizations with which I was affiliated.

Now retired, I write short stories, and I’m working on my memoir. My work appears in a number of anthologies, including Not Your Mother’s Book…On Home Improvement, available on Amazon.com in mid-September. Feature articles have been published in the Danville Times and on Patch.com.

As important as writing is in my life, I can’t imagine tapping out manuscripts on a manual typewriter, like Hemingway or Fitzgerald. God forbid one should scribble out a plot line on a pad of paper with a fountain pen, like Twain. And what of Austen and the Brontë sisters, poor creatures, scratching out prose with a quill.

One thing I know for sure – I would not be a writer if I had not found word processing.

2 responses to “ABOUT CAMILLE”