My earliest memories of my big brother are of him barreling through the back door to bum a dollar for gas off Dad. He always seemed to have his head under the hood of a car back then.

He married Frances, the love of his life and moved out before I was in my teens, so we didn’t spend much time together for the next 30 years or so, other than at family holiday dinners.

But Gary was always looking out for his little sister.

I can honestly say I owe Gary and Fran for the roof over my and my daughter’s heads after my divorce in the late ’70s. I needed financial help to buy a condo. He and Fran didn’t hesitate. It took years for me to repay them, but they never mentioned it. A few years later I took a new boyfriend to their house for a family event. The next day, Gary, who seldom had an unkind word for anyone, called to tell me what he thought of him.

I got all huffy and told him to mind his own business. But I eventually broke up with that guy. Turns out Gary was right.

In the ’90s he and Fran started going to a club in Pleasanton for dinner and line dancing on Tuesday nights. Since I lived nearby, they invited me to join them.

One evening Gary introduced me to a hot rod buddy of his named Jerry. The rest as they say is history.

Gary served as Jerry’s best man at our wedding and it’s safe to say, Jerry’s best friend from then on. I was the lucky recipient of the fallout from that relationship. When Gary came down from Clearlake, where he and Fran moved after he retired, to attend swap meets and GoodGuys car shows with Jerry, he’d stay a night or two in our guest room and we’d talk about growing up in Oakland.

We started communicating via email around that time. He signed his “Bro.” I signed off, “Sis.” I learned so much about Mom and Dad and our family history in the wonderful stories Gary shared with me about the years before I was born.

When Mom passed away, we sorted through her belongings, looking for important documents and family heirlooms. I came across a photo of Fran, taken about t 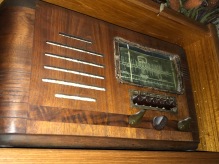 Gary loved to tinker with electronics. For our wedding, he gave us a ’40s era tabletop radio he restored. To this day,  it’s one of my most treasured possessions.

Gary took on the role of bonus grandpa when my grandson, Jackson, was born. Lately, he adopted the nickname, Uncle Grandpa. One of my favorite pictures is of the two of them lying on their backs next to each other on the floor when Jackson was about six months old, Gary reading to him from a book he held above their heads.

This past November, we arranged with the owner of our childhood home in Oakland to let us see the inside one more time. We reenacted a photo of the two of us as kids sitting on the front porch. Gary posed for another one with his truck parked in the same spot he always parked in back in the day. Afterwards, we walked around the neighborhood. Gary pointed out the houses where his schoolmates lived and shared stories about those days. I think it’s fitting that that was the last time we were together.

I can never thank him enough for looking out for his little sister all those years.

I miss you every day, Bro. Love, Sis.